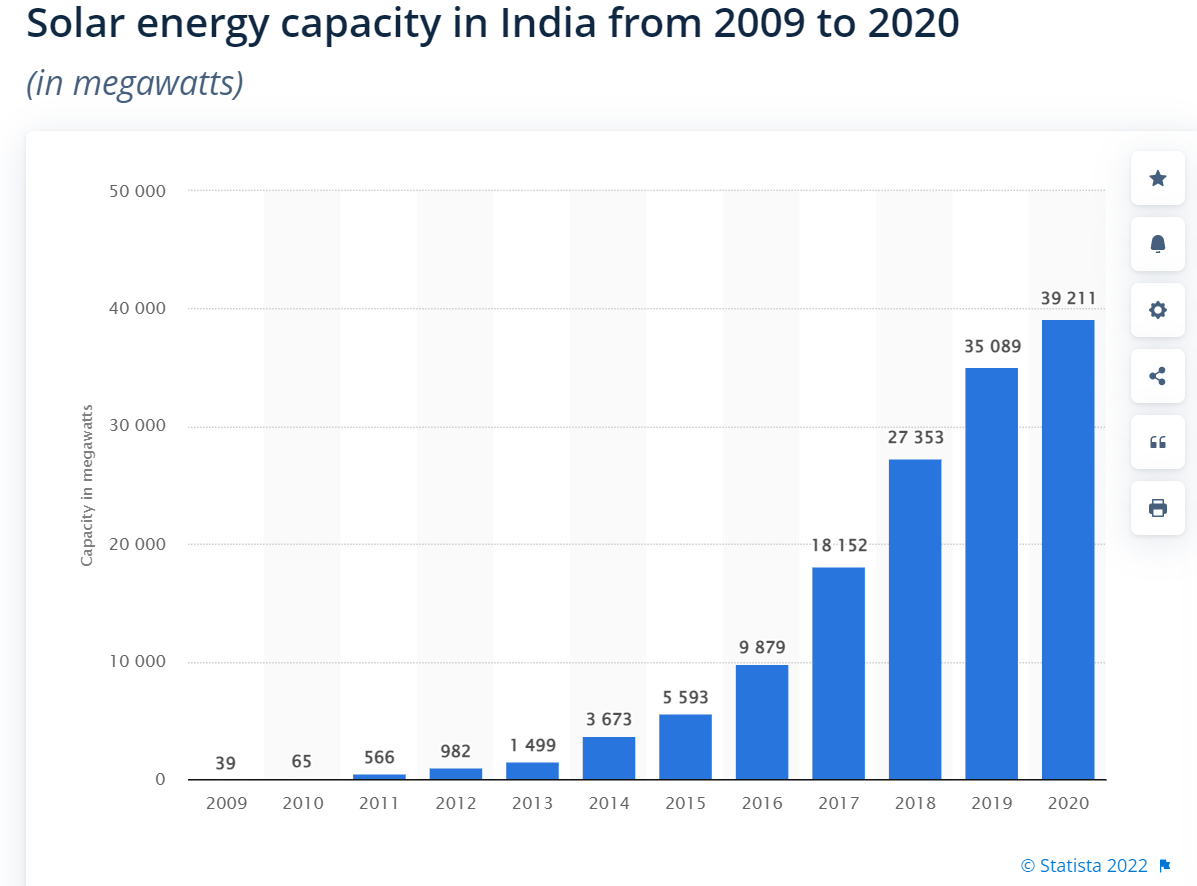 Solar power has already taken the world by storm with its promises to be a cleaner and renewable source of energy, compared to fossil fuels. In fact, solar power generation in 2020 had increased by 23%, accounting for 3.1% of global energy generation.

As such, many countries are experimenting with various developments in this rising star in energy. Among these countries is India.

So, how is solar power just an important source of energy for India? The statistics may surprise you.

The benefits of solar power for India?

First, it’s important to talk about the benefits of solar energy.

On a basic level, Indian villages and towns can benefit from solar energy in the following ways:

With such benefits on the horizon, it’s no wonder that India has been hard at work at making solar power a part of the nation’s sustainability.

Any Policies for solar power in India?

So far, there have been many policies to come and go when it comes to solar power.

One such example was the Renewable Purchase Obligation (RPO). While its mission was to have interested parties purchase a certain amount of renewable energy sources to meet RPO requirements, this initiative eventually fell through, due to the difficulty of overcoming restrictions on renewable energy certificates (RECs) trade.

Despite the failure of RPO, India was quick to implement the National Action Plan on Climate Change (NAPCC). This initiative has an important division called the Solar Mission. As such, Phase I of this initiative enacted the Rooftop PV and Small-Scale Generation Program (RPSSGP), which advocated for rooftop and ground-mounted solar systems for commercial and consumer use.

According to Solarify, RPSSGP has enacted the following policies and regulations to ensure that solar power is commonplace in India:

With such policies, India has already had its mind set in replacing traditional resources with solar energy.

“With solar power now being a desired source of energy, different parts of India are already experimenting with initiatives and projects,” says Stacy Winestock, a writer at Assignment Writing Service. “While some regions had experienced this energy trend late, others have already seen the potential of solar and have reaped the benefits. As a result, residents in India will soon break away from relying on traditional resources like wood, natural gas, and fossil fuels in general.”

With that said, the following regions in India have already started taking advantage of solar power, along with their respective statistics:

First, Andhra Pradesh has found solace in solar power over the years.

Andhra Pradesh – a proprietor of Hinduism, cultural history, and tourism – has evolved since its founding. It now has power plants that hope to incorporate solar power full-time in the future.

While its primary energy resource for the power plants is thermal (which is natural gas and coal based) for the time being, this hasn’t stopped the state from experimenting with solar energy.

Already, Andhra Pradesh has rolled out power through pumped hydroelectric energy storage (or PHES). This has become a stepping stone for solar power, since it’s made to work with PHES sites. As a result, solar power is converted into workable energy that’s available during the day, so that it rounds out with the clock power supply.

In addition, Andhra Pradesh has planned for more work with solar power. Here are just some of the ideas brought on by this energy trend:

Most notably, Gujarat is said to be one of India’s most solar-developed states, and rightfully so. What makes Gujarat a solar-energy powerhouse in India is its availability of vacant land to install solar panels and rooftops in. Plus, the state has access to transmission and distribution infrastructure, along with abundant connectivity and utilities.

As such, the state has developed various solar projects and policies to ensure that solar power is at the forefront of cleaner energy in India.

Here are some of the ways that Gujarat has embarked on its mission to be self-sufficient with solar power:

With Gujarat as a powerhouse of solar energy in India, its solar parks are also worth mentioning. Here are some of the state’s most successful solar parks to date:

As of late March 2021, the total amount of installed solar power generation capacity of Gujarat is 4,431 MW.

Another state in India dabbling in solar power is Haryana.

A landlocked state, Haryana heavily relies on electrical infrastructure. As such, the state had turned to solar power to enhance its electrical output for its residence.

As a result, the solar power plant would offer a subsidy of 90% to consumers and businesses. And, as an added bonus, residents in Haryana are given a 100% waiver for the following expenses:

Not only do these waivers save Haryana residents money on energy bills, but they also help rooftop solar projects flourish in support – both financially and socially.

Next is the common travel escape of India – Kerala.

Kerala, known for its extravagant tourism and its love for sports, is another part of India that values cleaner energy. So, with solar energy growing in popularity, Kerala was there to make plans to incorporate this energy into its blood flow.

In September 2021, Kerala had announced its plans to achieve self-sufficiency through power generation. In the region’s plan, solar will be used along with hydro, wind, and other renewable resources to produce energy. This plan is expected to span over a five-year period and generate an additional 3,000 MW of power, with solar generating a huge chunk of that power with 2,000 MW.

One of its achievements so far is its Cochin International Airport – the seventh busiest airport in the world – which is said to be fully-powered by solar energy. Furthermore, this marked the first solar-powered airport bar none.

Ladakh, a union territory in India, breeds ancient and medieval history. With its love for music and dance, and its mouthwatering cuisine, it’s no secret that this region has evolved over the years. And now, with a population of 292,000 (or 2.92 Lakhs), Ladakh’s potential continues to shine by now experimenting with solar power.

Despite being late to the party, Ladakh eventually opted for building solar power plants. This project will span a few years, since Ladakh plans to install nearly 7,500 MW capacity. As of November 2021, 20,000 acres of land have been reserved to create a renewable energy part, which will accommodate greatly to solar energy.

And finally, there is India’s second largest bastion, Maharashtra. The second most populous state in India, Maharashtra is a staple of religion and culture amongst its people. With such a large population, there is now a need for sustainability and a better quality of life. In fact, environmental initiatives like the Maharashtra Pollution Control Board (MPCB) have made it their mission to implement many environmental legislations in the state.

Another notable development from Maharashtra is the 125-MW Sakri solar plant, which is the largest solar-power plant in the region. Located at the Shidi shrine, and built for an estimated ₹1.33 crore (or $170,000 USD), this solar plant was the brainchild of the Shri Saibaba Sansthan Trust.

The Trust had a vision of making Maharashtra self-sufficient when it comes to renewable energy. With this solar plant, consumers will reap the following benefits:

By taking the state’s climate into consideration – abundant sun and high temperatures – solar energy is both acknowledged and welcomed.

Today, India is still dabbling with solar power. As of January 2022, the country has reported to have a plan to add 12.5GW of solar power between 2022 and 2023. Moreover, this increased solar power will come from upcoming PV projects.

With its continued mission to thrive on solar energy, it seems that India is set on becoming a truly sustainable nation.

Madeline Miller is a writer and blogger for various online publications and sites. As a content writer, she writes articles and guides about solar energy, eco-friendly trends, environmental issues, and globalization efforts.