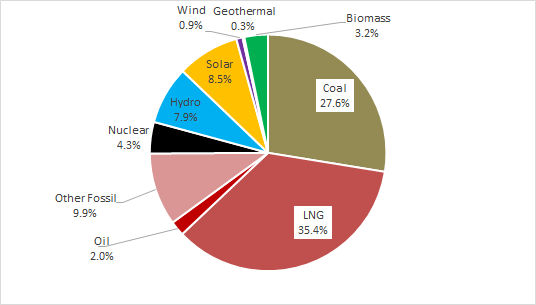 In 2020, Japan was one of the leading countries by solar energy consumption worldwide. In fact, solar energy is considered Japan’s second-largest renewable energy source. Here’s everything you need to know about the current situation and what the future looks like for the solar energy industry of Japan.

The 2020 Solar Energy Market In Japan

Back in 2011, the share of renewable energy in electricity generation in Japan was only around 10%. That number has since doubled with 2020 showing numbers as high as 19.8%. There are several reasons for such growth largely connected to the country’s recent history.

The 2011 Fukushima nuclear disaster led to Japan replacing nuclear energy with fossil fuels. Thus, in 2020, 39% of electricity in the country was generated from natural gas. However, because Japan doesn’t have fossil fuel reserves of its own, it became largely dependent on imports which, in turn, had economic consequences.

Naturally, Japan is now aiming to become more independent and to increase the self-sufficiency rate of primary energy. A logical solution for this is to transition to renewable energy which will also help the country to reduce its carbon footprint and decrease electric power costs.

The country’s current policy is to replace fossil fuels with nuclear and renewable energy sources, so the government is actively supporting expansion in this direction. In 2020, the Japanese government even announced that the goal is to make the country completely emission-free by 2050 (though this announcement was met with skepticism).

In 2020, Japan’s electricity produced from solar power amounted to around 79 terawatt hours. In 2021, there were over 3.7 thousand solar power plants in Japan – more power stations than any other renewable energy source in the country (Miyagi prefecture is leading with 565 electric power stations). Moreover, solar energy has recently overtook hydropower in Japan as the biggest renewable energy source in electricity generation.

All of this points to the growth of the Japanese solar energy industry. It is likely that the trend will continue as the government keeps promoting the transition to nuclear and renewable energy sources.

The Reasons Behind The Growth Of The Solar Industry in Japan

As mentioned above, there are two important reasons why the solar industry in Japan is growing. Hinata Watanabe, an expert from a college essay writing service reviews site, explains, “The Japanese government wants to be less dependent on fossil fuel imports from other countries. But at the same time, by transitioning to renewable energy sources, the country can drastically reduce its greenhouse gas emissions.”

Hydropower is a major energy source for the country as well. Nevertheless, there is little room for expansion considering that the conventional hydropower capabilities of Japan are almost fully developed. That is why the Japanese government is now focusing more on solar energy.

The reason why there is limited space for installing certain types of power stations in Japan is that the country is considered to be a very mountainous island. This means that there is not that much land space, but there is plenty of water around the country. As a result, Japan became one of the first countries that started investing in floating solar panels.

With all of this in mind, it is undeniable that there is increasing attention to solar energy in Japan. Both domestic and foreign investors have already promoted the growth of the industry and it is likely that this trend will continue in the future.

Despite all the focus on renewable energy that is now evident in Japan, the country’s carbon dioxide emissions are still very high. Moreover, fossil fuel combustion is the primary greenhouse gas emissions source which is why Japan’s energy sector emits more gases than any other industry in the country.

Japan is a member of the Paris Agreement which is why it is expected to meet specific climate goals agreed upon with the international community. Thus, the country’s government aims to reinvent the energy sector and restructure it in hopes of eventually reducing emissions and maybe even bringing them to a minimum.

At the moment, the main goal is to replace fossil fuels with low-carbon energy sources. Such sources are considered to be nuclear energy and renewable energy sources such as solar power and wind power among others.

When it comes to specific numbers, the Japanese government made a statement that the goal is to reduce emissions by 46% by 2030 (compared to the levels seen in 2013). In addition to that, more long-term goals involve making the country completely carbon-neutral by 2050.

As noted earlier, this statement was met with skepticism due to Japan’s current situation.

That being said, Japan is still making the necessary changes and slowly moving towards its goals. Recent numbers for greenhouse emissions show a downward trend which means the new measures that are being implemented are actually working.

The 2011 Fukushima nuclear disaster was unarguably one of the most important events for the energy industry in Japan. However, there were key changes implemented by the government that also made a contribution to the current state of affairs in the country.

Here is a rundown of these events:

Japan’s Solar Industry Compared To Others

Japan’s Power Sources in 2019, for comparison

The annual amount of electricity generated by different renewables in 2020 can be broken down into:

The annual amount of electricity generated by non-renewable sources in 2020 can be broken down into:

The Japanese renewable energy sector is the world’s fifth largest employer. In 2019, 93% of all the jobs in the country’s renewable energy industry were in solar PV which equated to around 249,800 jobs. 4% were in hydropower which is the equivalent of around 10,700 jobs. In comparison, the EU’s total number of direct and indirect jobs in this sector is estimated at 267,000. It is estimated that there could be over 67,000 new jobs created by 2050 in Japan.

Despite the fact that solar energy products are backed by the government and there are many investments in the industry already, there is somewhat of a paradoxical situation unfolding in Japan.

Ichika Goto, an expert from the top writing reviews site, says, “There is definitely more attention drawn to the renewable energy market in Japan. Especially in recent years, when the government started actively supporting projects in solar energy and the like. However, it’s unfortunate that there is often not enough financial support to make these projects possible.”

Over the past few years, there were billions of dollars invested into the industry, but it may not be enough which is why foreign investors are always welcome. In 2015, investment in clean energy in Japan was at $31.05 billion. This figure decreased every year and was only at $15.87 billion in 2019.

Indeed, it appears that the majority of the Japanese population is satisfied with solar energy with only 1.1% of the surveyed saying they were dissatisfied with it. That being said, most people in Japan don’t install solar power generation systems in their homes.

In 2021, around 91% of the surveyed said that they did not have a solar power generation system installed at home and only 7.8% said they considered it and installed it themselves. High installation costs are the most common reason for not installing such systems. The second reason is considered to be the future maintenance costs.

Recommendations From The International Community

As explained earlier, the statement made by the Japanese government about the country’s ambitions to become completely carbon-neutral by 2050 was met with skepticism due to the current state of affairs in Japan’s energy sector. Thus, the International Energy Agency (IEA) has published a set of recommendations for the Japanese government:

Japan is already on its way to implementing many new changes that are helping the country to become less dependent on fossil fuels and more reliant on renewable energy sources. With the right guidance from the international community and more investments into the renewable energy sector, it is possible to make significant changes in the nearest future.

To summarize, while Japan might not have the biggest share of solar energy production compared to other countries, it is still making the right steps to increase maximize the output of its renewable energy sources. The Japanese government is actively promoting the transition to nuclear and renewable energy sources to become less reliant on imported fossil fuels. In the following decades, Japan will continue investing in its solar energy industry.