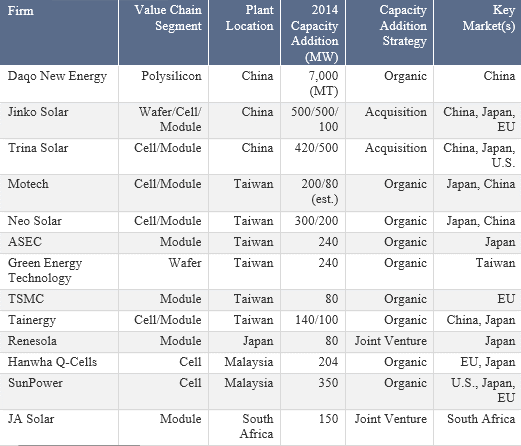 For the better part of the past two years, the phrase “capacity expansion” in the PV manufacturing industry had been about as fashionable as a Nickelback t-shirt at an indie rock concert. That is, until recently.

After a prolonged dry period, the past quarter has witnessed a spate of announcements by firms across the PV value chain for capacity additions in 2014, as shown in the table below.

It is worth noting that this is not a comprehensive list of 2014 capacity additions, just recently announced ones, and so it excludes most new polysilicon additions. Lead times for polysilicon plants are long, and almost of the new capacity coming on-line in 2014 was announced more than a year ago. In looking at the table above, one is reminded that most, if not all, PV manufacturers have only been back in the black for a couple of quarters; it was only a year ago that the PV manufacturing sector seemed firmly entrenched within the throes of overcapacity.

How, then, is one to interpret these announcements? Do they reflect irrational exuberance on the part of a few overly aggressive suppliers due to a recent period of stable pricing? Or do they signal that an inflection point has been reached in PV supply-demand balance, and that other well-positioned suppliers will follow the trend set by these early movers?

The chart below attempts to answer this question by comparing installed manufacturing capacity at the end of 2013 to expected PV demand in 2014, which, in terms of installations, GTM Research estimates at almost 42 gigawatts. Accounting for inventory effects across the PV value chain, we see that supply in terms of available capacity exceeds demand in 2014 by 16 percent for polysilicon, 20 percent for wafers, 19 percent for cells and 40 percent for modules.

One would be tempted to conclude from this that even with strong end-market growth of more than 20 percent expected in 2014, the PV market would still be oversupplied and new capacity additions in 2014 would be unwarranted.