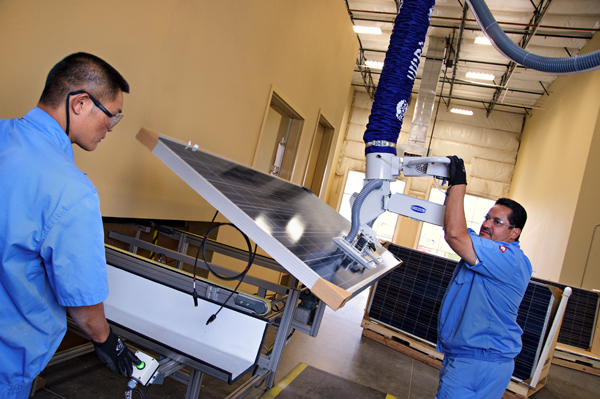 What is a gigawatt?

One billion (109) watts. That’s the total capacity of all the solar panels Suntech has now delivered to customers throughout North and South America. That’s no small amount of energy: One gigawatt of solar panels is enough to power about 113,000 U.S. homes a year!

We passed the 1 GW milestone in July 2012, making Suntech one of the first global solar companies with a gigawatt track record in the Americas.

Suntech America was founded five years ago in San Francisco, California. In 2010 we opened a manufacturing facility in Arizona to help meet growing solar demand throughout the Americas. Since then, the factory has expanded to 50 megawatts in annual capacity and runs three shifts to produce high-quality solar panels for our customers, including projects like Mesquite Solar 1 and Edwards Airforce Base.

We employ about 180 people throughout the Americas, including several military veterans and a father-mother-son team (here) on the Arizona factory floor. And we work closely with thousands of American solar industry professionals through our suppliers, distributors, installers.

We’re proud to be able to deliver low-risk, long-term price stability against a backdrop of fossil fuel price instability. Solar offers a brilliant value proposition today that will only improve with time, providing important community and environmental benefits. In fact, one gigawatt of reduces CO2 emissions by roughly the same amount as planting 400,000 acres of trees, according to Solar Energy Industries Association calculations.

Globally, we’ve shipped 7 gigawatts of panels to more than 1,000 customers in more than 80 countries. Deployed Suntech solar panels altogether generate about 9 terawatt hours of clean electricity per year. That’s greater than the power consumption of Costa Rica or Paraguay, according to data from the CIA World Factbook.

We’re proud to lead the clean energy revolution from kilowatts to megawatts, megawatts to gigawatts, and next from gigawatts to terawatts.